Rada Mihalcea, The Pandemic Project and the University of Michigan

I am a mother of two. I am a professor teaching computer science. I am a research advisor for ten PhD students, two research fellows, and several masters and undergraduate students. I am the director of a large Artificial Intelligence lab. My first and fifth grade children used to go to school, but that’s no longer the case – so I am also an elementary school teacher. We used to occasionally go out to restaurants, and we used to have house cleaning help, but that’s no longer the case either – so I am a cook and a maid. And aside from all these, I am also me – someone who enjoys taking time to read, to learn or try new things, or simply be by myself (yes, I am an introvert).

I am just one of many. As it turns out, among the nearly 15,000 respondents who completed our survey, about a quarter (25.7%) have one or more children living with them. For all these people, what used to be parallel tracks of life –  parents or caregivers doing their work, children going to school or daycare, food being cooked not only at home but also at restaurants or sometime offered at the workplace, housework sometime done with help from others – has now been all compressed into a single track, with parents becoming full time caregivers and educators, cooks and maids, while also continuing with their work. It comes at no surprise that parents feel like full-time jugglers. Talking to many of my friends and colleagues with children, I hear them often using words like  “juggle,” “manage,” or “balance.” In fact, when the respondents to our survey were asked to talk about their thoughts and feelings related to the COVID outbreak and its effects on their lives, 26.1% more people living with children used words indicating an effort to “juggle” things, as compared to those with no children in the household.

Figure 1. Percentage of people among the 15,000 respondents who completed our survey who reported having one or more children living with them. Gender distribution is similar between the people living with children and those living without children; median age is also similar.

This constant juggling has important implications. First, it amplifies the daily life disruptions brought by the outbreak. While everyone has been equally disrupted when it comes to travel plans, social life, going to public spaces, or living arrangements, people living with children report experiencing more disruption in three main aspects of their lives: daily routines, work patterns, and their family education. This is not surprising as all these disruption patterns are interconnected: work and education are now happening at the same time, which not only disrupts both, but also disrupts the entire daily routine. 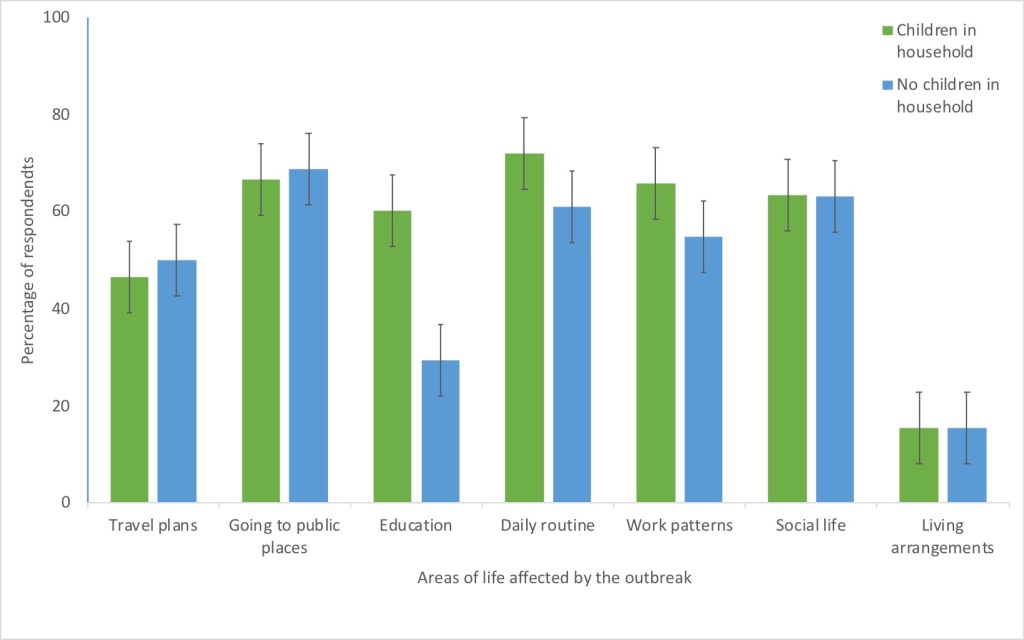 Figure 2. Percentage of people with or without children in their household who reported that certain areas of their life have been affected “a lot” or “a great deal.”

Third, the juggling has the effect of bringing different aspects of life within the same space. We as parents are now trying to “keep in the air” multiple balls of responsibilities: children and work and cooking and housework and our personal selves. In the process, we somehow become more responsible for all these aspects of our lives. In fact, when asked to what extent they feel personally responsible for the well-being of others, four times more people with children indicated they felt a lot of responsibility for family as compared to those with no children. Interestingly, those living with children also feel more responsibility toward the people they work with (e.g., employees, students, customers), despite spending the same average number of hours working as those with no children: as many as 50% more people living with children reported feeling a lot of responsibility for their co-workers, which is equally true for both mothers and fathers. Very much like a real juggler, who cannot favor one ball versus another, we feel increased responsibility for all the balls we juggle with.

Figure 3. Percentage of people with or without children in their household, who reported feeling a lot of responsibility for the well-being of people in their family or at work.

Fourth, this whole juggling experience puts us in a somehow more sensitive position. We feel an  increased sense of responsibility toward all those balls we juggle, which changes our perception of the pandemic. When asked to what extent they found the COVID outbreak terrifying, 14% more people with children reported that the outbreak was terrifying  “a lot” or “a great deal” as compared to those with no children in their household.

Finally, in the process, we have become experienced jugglers. We are more efficient in what we do, and for better or worse we eventually manage to keep all those balls in the air. Despite all the disruptions in daily life and habits, the increased responsibilities, the extra load of work, childcare, homeschooling, housework, and a roller coaster of emotions, we parents are equally productive to those living with no children: when asked to what degree they have been  productive in terms of work, all our survey respondents indicated an average of 2.7 on a scale of 1-5, regardless of the presence of children.

So here I am, one child sitting on my side, writing these findings on living with children during COVID, after a day when I worked on research, advised students, led an event, worked on first grade science and fifth grade math, played, cooked and cleaned, and found some time to read and bike. Along with all the other parents out there, I too have become a professional juggler.