Alexander Kellogg, Ashwini Ashokkumar, and James W. Pennebaker, The Pandemic Project and the University of Texas at Austin

Throughout history, epidemics have frequently been accompanied by hostility towards outsiders. As people struggle to make sense of disaster, it is tempting to seek out scapegoats, and unfamiliar others from faraway lands make for easy targets. In the United States, there is a long history of branding immigrants as vectors of disease. As the historian Alan M. Kraut has documented in his book, Silent Travelers (1994), an array of ethnic and national groups have fallen victim to this characterization, including Haitians (primarily for yellow fever and later HIV), the Chinese (for bubonic plague), and Eastern European Jews (for tuberculosis). Unfortunately, beliefs that immigrants are disease carriers have typically fueled demands for greater scrutiny and exclusion.

Another sign of this paranoia is the rise of conspiracy theories, particularly those involving foreign institutions and governments. Baseless accusations of biological warfare have been recorded as far back as the Plague of Athens in 430 BCE, in which some citizens speculated that the Peloponnesians were poisoning nearby reservoirs. Likewise, during the 1918 “Spanish Flu,” panic ensued after a public health official alleged that Bayer was contaminating aspirin with the influenza virus to further the German war effort (see The Great Influenza by John Barry). In the midst of the ongoing COVID-19 pandemic, claims have begun to circulate that COVID-19 was created by a lab in Wuhan, for instance, or that the symptoms could somehow be traced to 5G technology. According to a Pew survey conducted last March, about 23% of Americans believe that the virus was “developed intentionally in a lab” and further 6% that it was “made accidentally.”

In our online survey, the Pandemic Project, we asked over 15,000 people about the extent to which they believed conspiracy theories and xenophobic narratives relating to the ongoing pandemic. Specifically, we asked whether they thought COVID-19 might be the result of a “foreign government conspiracy” or of immigrants coming to their country. As might be expected, the vast majority of our respondents rejected such notions – only 5.4% of answers indicated “A lot” or “A great deal” of agreement that a foreign government was responsible for COVID-19 and only 2.5% that immigrants were responsible. Closer analysis indicated broad similarity among adherents of both beliefs across a wide range of variables.

Who blames foreigners for COVID-19?

Our results indicate that people who blame foreigners for COVID-19 tend to be younger, less educated, more right-wing/conservative, and more likely to be male. Among these, the most dramatic differences were in political orientation and educational attainment. Politically, of those who identified themselves as “Extremely Conservative/Right-Wing,” 12.1% embraced the foreign government conspiracy theory and 6.7% blamed immigrants for spreading the virus, as opposed to just 0.6% and 0.3% of people who identified as “Extremely Liberal/Left-Wing. Similar demographic differences were uncovered in recent Pew surveys.

Table 1. Percentage of each group that agrees “A great deal” with the statements “COVID-19 might be the result of a foreign government conspiracy” and “COVID-19 is a result of immigrants coming to your country.”

What are the psychological and behavioral patterns associated with these beliefs?

After accounting for differences due to demographic variables such as age, education, gender, and political orientation, three major patterns emerge: increased emotional distress, greater use of the internet and social media, and decreased social distancing.

Respondents who blamed foreigners expressed more negative feelings in relation to COVID-19, describing it as annoying, anxiety-provoking, terrifying, depressing, and boring. Furthermore, their distress transcended thoughts about the pandemic. They experienced low moods in general, reporting increased depression, anxiety, anger, and even interpersonal conflict. They also felt lonely, despite living with and spending more time around other people. When asked to stand back and reflect, people who endorsed conspiracy and xenophobic beliefs reported a diminished sense of meaning in life and a stronger desire to make fundamental changes. However, these effects consistently appeared only after controlling for political orientation and demographic variables.

Figure 1. Emotional distress (including depression, anxiety, and loneliness) is associated with blaming a foreign government conspiracy or immigrants for the COVID-19 pandemic. Participants rated their agreement on a scale from 1 (“Not at all”) to 5 (“A great deal”).

Roxane Cohen-Silver and her team at UC Irvine have found that exposure to media coverage about a crisis tends to exacerbate emotional distress and post-traumatic symptoms. Moreover, our own analysis has revealed connections between obsession with COVID-related information and poorer mental health outcomes. People who endorsed coronavirus conspiracy theories reported spending more time watching or listening to news about COVID-19 and discussing it with others, which may be contributing to their increased negative emotion. However, our analysis is correlational and cannot provide causal insight. In other words, it is unclear whether conspiracy theories cause distress or whether preexisting distress makes people more susceptible to these beliefs.

Social Media and The Internet

In recent years, an alarming number of conspiracy theories have either originated on or achieved peak circulation through social media, most infamously “Pizzagate” and “QAnon.” Some of the most prominent promoters of the coronavirus conspiracy theories – including Alex Jones (host of the website InfoWars), Judy Mikovits (star of the viral video Plandemic), and David Icke (whose interview on the YouTube channel London Real popularized the notion that 5G could cause respiratory failure) – were already notorious for espousing a wide range of bizarre and conspiratorial beliefs and have relied primarily on the internet to spread their message. Moreover, with the pandemic in progress, people have been engaging in less in-person communication and spending more time online. A recent study by Drs. Kathleen Jamieson and Dolores Albarracin found that endorsement of COVID-19 misinformation and conspiracy theories increases with exposure to social media and use of conservative media sources.

In our analysis, endorsement of conspiracy and anti-immigrant beliefs positively correlated with hours spent on social media and frequency of online interaction with others (outside of one’s usual circle of family and friends). Furthermore, believers reported greater reliance on Facebook, Youtube, Twitter, and other social media sources for information about COVID-19, but not government sources or print or online news. This suggests that these xenophobic narratives are transmitted and reinforced largely through informal networks enabled by the internet. Through dependence on one another for information and disinterest in reputable news sources, an online group can easily devolve into a self-referential “echo chamber” disconnected from mainstream society and any inconvenient facts.

Finally, individuals endorsing conspiracy and anti-immigrant beliefs practiced less social distancing and indulged in more risky social interactions. Believers reported less self-isolating and less time spent in quarantine, along with more frequent use of public transit and attendance at crowded gatherings for recreational purposes. Moreover, they engaged in more face-to-face (but not more virtual) interactions with friends and family. One reason for this disregard of safety recommendations may be the type of media these individuals prefer to consume. After all, the same far-right media sources that peddle COVID-19 conspiracy theories also tend to express disdain for preventative measures such as social distancing and hand-washing. Another contributing factor may be a diminished sense of responsibility for the health of others. If the epidemic is entirely the fault of suspicious outsiders, there is little incentive to make personal sacrifices to prevent its spread. Consistent with this, those who blamed foreigners, while personally fearful of catching and/or dying of COVID-19, exhibited considerably less concern about infecting other people or about family members getting sick. 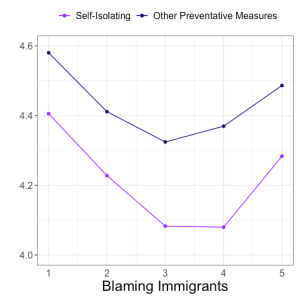 Figure 3. People who believed that COVID-19 was the result of a foreign government conspiracy or of immigration were less likely to self-isolate (e.g., stay at home, avoid public places) or to practice other preventative measures (e.g., washing hands).

We can begin to construct a picture of who is likely to blame foreign conspiracies or immigration for COVID-19 and why. To begin with, people who lean towards the right-wing of the political spectrum may be more receptive to claims that cast foreigners or minorities in a negative light. Anti-Chinese narratives have been circulating primarily through right-wing media outlets (e.g., Fox News) and internet posts, and a combination of shared political sympathies and greater reliance on social media for information may be key to their spread. Furthermore, believers appear to be considerably less educated, making it more difficult for them to evaluate the credibility of sources and distinguish science-based claims from misinformation.

In recognition of the public health threat posed by misinformation about the virus, the World Health Organization (WHO) has warned of an “infodemic” and begun working alongside companies such as Facebook and Google to combat the problem. Of course, blaming foreigners for COVID-19 is only likely to make the situation worse, not only for the scapegoats, but for the public at large. Most obviously, it will divert attention and resources from the actual issues at hand. At the same time, given the distress and risky behavior associated with these xenophobic beliefs, it may very well contribute to the spread of the disease and aggravate its psychological sequelae.